It was not easy—and it certainly was not pretty but the Penn State Nittany Lions somehow found a way to pull off a 16-10 upset at Wisconsin to open the 2021 college football season.

The two teams spent the first quarter mostly just feeling each other out. The longest drive in the frame was a seven-play, 31-yard possession by the Nittany Lions that ultimately ended with a turnover on downs. It was at the end of the quarter when the Wisconsin offense finally started to show some life.

The Badgers ended the first quarter in the middle of a 15-play, 46-yard drive that would take them down to the Penn State two-yard line.  Wisconsin leaned on running back Chez Mellusi on the drive. Mellusi, a transfer from Clemson, carried the ball seven times for 32 yards.

With the ball first-and-goal from the PSU two, Wisconsin never got any closer. After a penalty and two incomplete passes, the Badgers were resigned to settle for a field goal attempt. That attempt failed, however, when defensive end Arnold Ebiketie got a hand on the ball and blocked the kick wide-left.

Ebiketie, a transfer from Temple, made an immediate impact in his first game in blue and white with several quarterback hurries throughout the game.

Penn State’s offense went three-and-out on their ensuing drive after the block and Wisconsin immediately went back to work. This drive lasted 12 plays and traveled 62 yards. It was a combined effort between Mellusi and Isaac Guerendo, who combined for 34 yards on seven carries.

This time, the Badgers worked their way to the PSU eight-yard line but yet again could not score. Quarterback Graham Mertz botched a handoff to Mellusi that Penn State junior Nick Tarburton fell on.

At that point in the second quarter, Wisconsin had run 27 of the last 30 offensive plays, gaining 108 yards in the process and yet had nothing on the scoreboard to show for it.

A third straight three-and-out by the Penn State offense put its defense in a terrible position, having been on the field for 14 of the game’s last 16 minutes. Mercifully, the half came to a close before Wisconsin could take advantage of PSU’s tired defense and the teams went into the lockers rooms with all zeros on the scoreboard.

In the first half, Penn State managed just one first down, gaining 43 yards on 22 plays. Wisconsin, by comparison, had 12 first downs with 132 yards on 43 plays.

The second half started in stark contrast to the first. After forcing a Badger punt, the Nittany Lions’ offense came out with a totally new game plan. They avoided the middle of the field as Sean Clifford completed three passes outside the numbers to Parker Washington and KeAndre Lambert-Smith. That drew Wisconsin’s defenders outside just enough for Jahan Dotson to break free streaking down the field as Clifford found him in stride for a 49-yard touchdown pass to go up 7-0.

The Badgers responded with their typically methodical 10-play, 75-yard drive, again leaning on Mellusi. The junior ran five times for 24 yards, capping the drive with a three-yard, game-tying score.

Penn State missed a field goal on their next drive and the Badger eventually took a 10-7 lead on a 43-yard kick by Collin Larsh.

To respond, Penn State leaned on their own junior running back, Noah Cain. Cain kicked the drive off with a 34-yard run and added a nine-yard reception to get the Nittany Lions deep in Wisconsin territory. That resulted in a game-tying 24-yard field goal by Jordan Stout.

In the fourth, Dotson got behind the defense again for a 42-yard catch that primed Penn State to take the lead. Cain delivered on that, punching the ball into the endzone from two yards out to give PSU a 16-10 lead after Stout missed the extra point.

On the next drive, PSU linebacker Ellis Brooks hit a scrambling Mertz near the sideline and was flagged for targeting and thrown out of the game. Brooks had arguably been his team’s best defender, leading the Nittany Lions with 11 total tackles and a tackle for loss.

The loss of Brooks did not cost the Nittany Lions, as they put together an impressive redzone stand that included another botch handoff by Mertz, two deflected passes and an interception on fourth down by senior safety Jaquan Brisker.

With just 2:16 left to play, Penn State was able to run enough time off the clock that Wisconsin’s final hopes hung on a last-second hail mary. Mertz’s last-second heave was picked off by Ji’Ayir Brown, securing the win for Penn State.

After a slow start, Clifford finished with 247 yards on 18-of-33 passing with a touchdown. Dotson put up 102 yards and a score on just five receptions while Lambert-Smith had 71 on four. Cain carried the ball eight times for 48 yards and a score.

Mellusi said he transferred to Wisconsin because he wanted to be a featured running back and he certainly was, carrying the ball 31 times for 132 yards and a touchdown.  Guerendo added 56 yards on 13 carries. Mertz threw for just 185 yards on 22-of-37 passing with two interceptions. 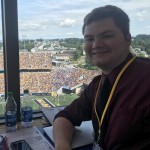