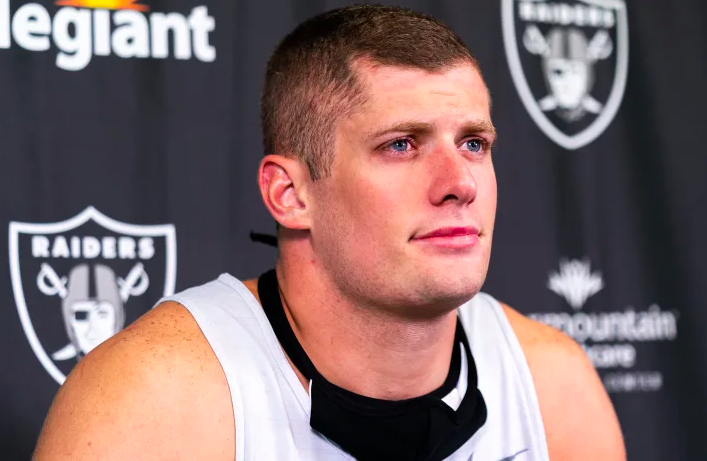 The former Nittany Lion, who became an All-American at Penn State during his senior year of 2015, will be released by the Las Vegas Raiders after two seasons with the team, ESPN’s Adam Schefter reports.

Carl Nassib will be designated a post June 1 release, saving the Raiders $8 million against the cap, per source. But Nassib free to find another team now. https://t.co/vdpUJ29QAz

Over 2020 and 2021, Nassib played in 27 games for Las Vegas, picking up 49 tackles and four sacks. The most notable aspect of Nassib’s time in Oakland, however, happened last offseason when, in June of 2021, Nassib came out as the first openly gay player in NFL history.

Before Vegas, Nassib played with the Cleveland Browns (2016-17) and Tampa Bay Buccaneers (2018-19). Before being selected by Cleveland in the 2016 draft, the West Chester, Pennsylvania, native played at Penn State from 2011-15, playing under Joe Paterno, Bill O’Brien and James Franklin.

After redshirting in 2011 and not seeing any game action in 2012, Nassib’s role gradually got bigger until, finally, in 2015, Nassib became a full-time starter.

Nassib ran with his opportunity, leading the nation in sacks in 2015 and winning the Lombardi Award for the nation’s top defensive lineman/linebacker.

Nassib is due to be released after June 1, which will save the Raiders $8 million. He’ll be able to speak with teams in the meantime.

In this article:Carl Nassib, featured, PSU in the NFL

0 PITTSBURGH — The Penn State, Pittsburgh Steelers and NFL communities were saddened to learn of the death of Hall of Fame Steelers running back Franco...