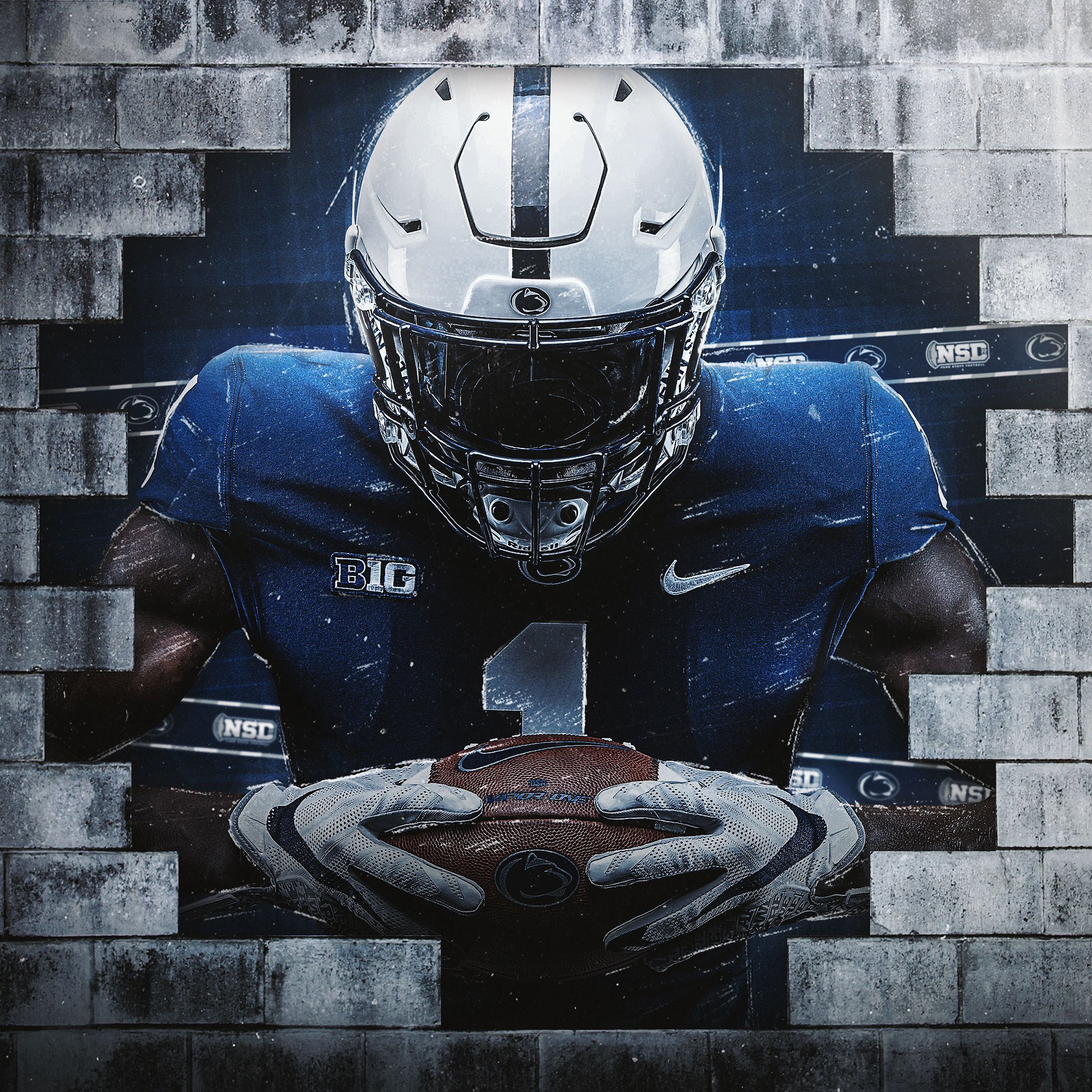 James Franklin knows his latest recruiting class could be a big one for Penn State. He discussed some the 23 players who signed on Wednesday hours after early signing day festivities wrapped up.

Here’s what Franklin had to say about some of the players that could have a critical impact on the future of Penn State football.

“We were recruiting him early on. We felt like, obviously, we signed two of the better quarterbacks in all of college football this year in terms of signing; he kind of did it old school. As he went to camps and as he played in the season, he just continued to do well, and his rankings continued to rise, and they were really impressed with him. Big kid. He can stand in the pocket and deliver the ball. I think people underestimated his athleticism as well. Does a great job making some of the plays that maybe aren’t in the playbook in terms of extending plays and off-balance throws, unbelievable accuracy and playmaking ability. He’s able to make some plays with his feet, too.”

“You look at Kaytron, and he has a different style. He’s a physical guy. He’s going to punish you. He’s been as big as 225 pounds. I think he’s about 215 right now. But it’s funny because people talk about how it’s almost thunder and lighting and that Nick is like this undersized scatback. I mean, Nick’s 215 pounds. Has the ability to go 80. Obviously, both of them, I don’t know if there’s a better running backs class signed in the country. Obviously, Nick being named the Gatorade National Player of the Year is pretty cool. We have really good history, as you know, of keeping running backs in the state of Pennsylvania, and those guys playing well. Obviously with Saquon (Barkley) and Miles (Sanders), and so on and so forth. We’ll see how it plays out. We’re super excited about getting them. We have a lot of work to do between now and then, but it’s super exciting, and I know you’ll have a lot of fun covering it.”

“As hard as you’ve worked to this point,” Franklin said. “It’s going to be a whole other level now.”

“I hope you have felt this throughout the entire recruiting process, but this is a place that really values special teams,” Franklin told his future punter. “A lot of places give it lip service.”

“I’m most impressed with the type of young man you are and the student you are,” Franklin said.

“We grew up right near each other, my high school dominates your high school,” Franklin, a native of Langhorne, PA, said. “But besides that, we’re just proud of you.”

“The way you handled this entire process was awesome,” Franklin said.  “I remember we offered a kid that we didn’t know very well from Milwaukee, Wisconsin, and the very next day, you called and tried to commit.

“Every step of the way, you handled it first class.”

“Dani’s a guy, obviously, that’s highly recruited. Really could have gone anywhere in the country; obviously, he not only going to high school in Maryland, but he’s from Delaware. We’ve had a bunch of success recruiting the state of Delaware as well if you look at our history. But he’s also a guy that, you look at his film, and also his measurables, he’s a guy that you sit here and say you can pencil him in as a guy that’s going to have an opportunity to compete even though he’s not coming in mid-semester. He’s 6-foot-5, he’s 255 pounds, he’s physical against the run, he can rush the passer. So, he’s not like an undersized defensive end that you’re going to have to develop over time. He has the ability to come in and compete from Day 1.

“It was really surreal today. We all got emotional; Mom and Dad got emotional talking about that. The fact that they feel strongly enough to trust their son to not go down the street, but go far away and to come to Penn State and play for me. To be able to coach dad and now son is really special. Obviously, that was the connection there, that we were able to get him involved in that process very early on. We had to work on Mom. Mom wanted him a little closer to home, and that’s some schools that you would be familiar with. Once we were able to get them all on campus, I think everybody felt like it made sense.”

“The thing that’s special about you that I want to make sure everybody knows is that you already have 26 credits. There’s no reason why you can’t do it all. That’s the plan. I’m super proud of you… Zane, I love you, big man, and can’t wait to get you here.”

“We felt like we needed to have a really strong recruiting class at the wide receiver position and get some speed and some size in here. Omari was playing quarterback, so you really didn’t get to evaluate him as a wide receiver. He came to camp and had one of the more impressive workouts that we’ve seen in terms of his 40, in terms of his broad jump, vertical jump, triple broad, pro agility and caught the ball extremely well. Did not drop a ball in our workout.”

Mehki, we’ve had an opportunity to see him in 7-on-7 in some camps as well. It’s interesting, at the home visit last week sat down with mom and dad, and dad asked the same question. So we want as many defensive backs with ball skills and length as we can possibly find, and I think these two guys fit those characteristics perfectly. Excited about their future and what they’re going to do.

“This is a special day for you, that entire community. A guy from in the state of Pennsylvania that decided to stay home, become a hometown hero, make history together. We couldn’t be prouder of you.”

“The foundation that Mom and Dad, and really all the people on this call have laid with Tyler is a strong one,” Franklin said. “We’re going to take a lot of pride in continuing to build on that foundation.”

“Penn State is much more than business,” Franklin said. “It’s about family.”

“Enjoy today, Cam,” Franklin said Wednesday morning. “Make sure you take time to thank Mom and Dad and all your coaches, your trainer, everybody because you haven’t done this by yourself.”

“It’s going to be harder than anything you’ve ever done before, but it’s also going to be the most rewarding experience.”

“He comes from a football family. His dad played at Shippensburg; brother’s a quarterback at Delaware. Unbelievable student. Really had an unbelievable senior year. You look at the numbers he was able to put up and the wins that they were able to have this year. It was a special year. He made plays with his feet; he made plays with his arm, his touchdown to interception ratio was fantastic. His completion percentage was fantastic. Coach (Gerry) Yonchiuk over there did an unbelievable job with him.”

“I think he was the first commitment in the class. We talked about that today over zoom with the family. Mom, Dad, grandparents have been phenomenal. He was a leader in the class early on. We’ve been recruiting him for a long time. I think Terry Smith actually was the coach that started us getting involved with the young man and his family and his high school coach. Then he committed and never wavered. Did a great job recruiting other guys to come with him. Obviously blew up when he got on the camp scene. Came to one of our camps and dominated that as well.

“Just tremendous character, tremendous playmaking ability. Kind of reminds me of a combination between maybe KJ (Hamler) and Jahan (Dotson).

Franklin also said that he could see Saunders being good enough to play defensive back, although the plan is surley to have him at receiver.

“We grew up right near each other, my high school dominates your high school,” Franklin, a native of Langhorne, Pennsylvania, said. “But besides that, we’re just proud of you.”

“Your improvement on the football field has been impressive over the past three years,” Franklin told Talley Wednesday. “But your improvement academically has been as well. I’m just so proud of you. You have the personality, when you walk into a room, you light up the room. You have a huge smile on your face. Your word means something. You committed to Penn State a long time ago. You’ve never wavered.”

“Has the length that we think can play safety. We think he can also play the star, the nickel-quarter position. And there’s part of me that would like to start him at corner, to see if he could do that.

“It’s not very often that we can get a young man like you,” Franklin told Wylie Wednesday morning during his selection. “That has great character, that has an unbelievable family and support system, but also comes from a great high school.”