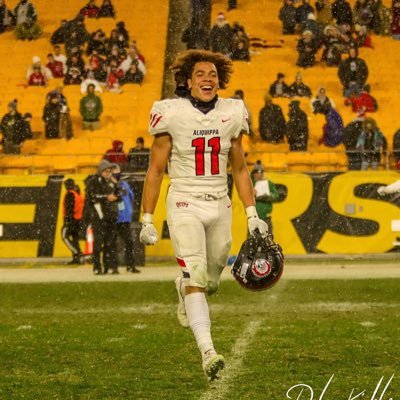 Penn State was the first school to offer Cameron Lindsey.

Now the soon-to-be junior at Aliquippa High School will be visiting Happy Valley with 10 Division I offers under his belt.

Lindsey, a 6-foot-2, 203-pound linebacker who is a four-star according to Rivals.com, got offered by Penn State Dec. 10, the day after his team won the PIAA state championship.

More than seven months later, he’s excited to visit the school ahead of his first season as an upperclassman.

Lindsey will be in attendance for Saturday’s Lasch Bash.

Did Linsdey’s first offer being from such a prominent program surprise him?

“It definitely did,” Lindsey told Nittany Sports Now. “For how big of a program Penn State is around here and around the country, really. Having that as a first offer is just super crazy.”

Things are different for Lindsey than they were a year ago when he had no offers.

He feels that more people are paying attention to him going into year three at Aliquippa.

“I would say there’s definitely a target on my back now,” Lindsey said, “and I’ve heard that from my coaches and from people that I know closely.

“There’s definitely a target on my back, and everybody’s probably gunning down to not only beat our team but just prove that they’re better than me.”

Aliquippa has been in the WPIAL title game 14 years in a row and is historically one of the top programs in Pennsylvania, if not the United States.

The standard is high.

“They expect the best from all of us,” Lindsey said, “and that’s what we want for ourselves is the best.”

Penn State lost, but the afternoon left an impression on Lindsey.

“That was my first real time going to any college outside of like a camp or anything,” he said. “Just seeing the campus and their facilities and stuff like that was mind-blowing to me because I would have never thought I could get a chance to see anything like that.”

A little less than a month later, Penn State offered Lindsey a scholarship.

Fittingly, the coach who offered him, Terry Smith, not only has roots in western Pennsylvania– playing, coaching and being the athletic director at Gateway High School in Monroeville– his family is from none other than Aliquippa.

“He has ties from around here, and I’ve gotten to know him a lot more in the short span of like six months,” Lindsey said. “So we’ve definitely had a relationship that’s just continued to grow.”

Lindsey has gotten to know another linebacker from the Pittsburgh area– Ta’Mere Robinson.

Aliquippa and Char Valley play in the same conference.

“They’re pretty cool guys,” Lindsey said, “and I’m happy for them both committing to the same school.”

Although it’s early to say whether Lindsey will follow Robinson in announcing his plans to join the “Linebacker U” lineage, Lindsey said Penn State’s history of premier players at the position is a factor he’ll weigh.

A prominent program like Penn State certainly could help Lindsey attain his “ultimate goal” of playing in the NFL.

A more immediate goal of Lindsey’s is to get to know the man coaching Penn State’s linebackers, defensive coordinator and linebackers coach Manny Diaz.

Diaz got officially hired at Penn State the day after Lindsey picked up his offer, and Lindsey said he doesn’t know much about him on a personal level.

From a technical standpoint, Lindsey feels his pass defense and tackling are strong suits.

“I’m pretty good in coverage (and) as a linebacker that can just come up and make a tackle when I’m most needed to,” he said. “Especially as the time went on in our season.”

So where is Penn State on Lindsey’s list at the moment?

Even if Penn State isn’t the pick, Lindsey is on a good track to play at a major school when his time comes.

“The goal’s always been to get to college for free and be able to play at that next level,” he said.