PITTSBURGH — Two years ago, the Penn State Volleyball Team beat Towson in four sets at University Park in a second-round NCAA Tournament contest and had a chance for a first-round victory at the Petersen Events Center.

The small contingent of Towson players were well aware of the result, but were determined to reverse its fortunes.

Though the opening two sets were split and the remaining pair of games were close in nature, it was #15 Penn State which again earned a 3-1 victory to advance into the second round.

“I’d first like to recognize Towson on another great season and a great match,” Penn State’s 43-year coach Russ Rose said. “We’ve played them a few times in the NCAA’s and it’s always a great challenge. They play hard, they play well together. We feel very fortunate to pick up the victory again today.”

“It’s a team we desire to be and emulate,” Towson coach Don Metil said. “It doesn’t get any easier, based on our region, we’ll always have a Penn State, Pittsburgh or Ohio State. We need to keep working hard, finding our way back here and compete.”

It was all Penn State in the first set as it scored the first five points of the contest, opening on a 10-2 run. Ultimately the set was won by a 25-11 score.

Penn State was plagued by service errors and net violations in the second half as Towson picked up its level of play.

The Nittany Lions led 18-15 in the set before Towson squared the game, winning the next three points.

As both teams fought for control of the game, Penn State earned a set point, which did not pan out due to a service effort.

Towson turned the set around, winning it 27-25 on a Kristin Spengler kill.

“I feel like for any team energy wise, you have to be able to maintain that energy through a match,” said Parker. “Obviously in the first set it was evident that our energy was high, and you could see it down in the second. That’s something we need to improve in order to succeed through the rest of the tournament.”

Penn State faced adversity in both the third and fourth sets, but turned to Hampton and Parker’s verbal examples in addition to their collective play on the court.

“I think they’re both people that go very very hard and are huge leaders for our team,” Blossom said. “Down the stretch, they made great plays that won us the game. Jenna is the one giving me the ball to set, and we passed very well tonight and she’s in charge of that. She made some incredible digs. Jonni is always talking and asking for the ball and as a setter, there is nothing you want more.”

Save for the opening point of the third set, Penn State never trailed, and mid-game opened up a four-point advantage. It would take the set 25-20.

In the fourth set, PSU opened on a 5-2 run, but would trail as the set reached the infancy of the middle stages.

Penn State responded pulled in another four-point lead and converted its second match point on a Rollins kill to secure a victory.

“I think we did a good job bouncing back,” said Hampton. “The second set wasn’t our best, but we didn’t let two become one towards the end and that’s something we’ve been really working on.”

The Lions will face overall No. 3 seed and host Pitt in the second round on Saturday. First serve is set for 7 p.m. 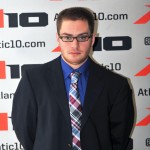 0 The Penn State women’s volleyball team has advanced to the regional semifinal round of the NCAA Tournament for the 18th consecutive year, sweeping...

1 Penn State is the No. 13 seed in the women’s volleyball NCAA Tournament, which begins in a week and a half, and the...