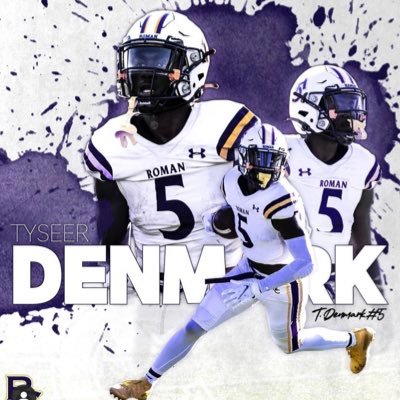 Tyseer Denmark, a 2024 four-star athlete out of Philadelphia, Pennsylvania, has cut his school choice down to 12, and Penn State made the list.

Really appreciate every school that is recruiting me, but these are the schools I am going to focus on at this time. Thank you, #Top12 #Blessed pic.twitter.com/SDiNWkNzU8

The 5-foot-11, 180-pound wide receiver out of Roman Catholic High School, is the number two player in Pennsylvania, the No. 13 wide receiver, and the No. 78 overall prospect in the class of 2024 according to 247Sports composite. Denmark has had 40 offers from Division one schools.

On3 believes that Penn State is the favorite to land Denmark giving them a 37% chance to land the in-state recruit, followed by Ohio State at 16.6%, then Rutgers at 7.4%

Demark had a notable performance last year in a critical game against one of the top schools in Pennsylvania, LaSalle High School, where he scored four touchdowns and made a critical stop on defense that put him on the map as an elite prospect. That was the first time Roman Catholic defeated LaSalle since 2007.

Denmark on tape shows the speed to break away from defenders and good route running ability for a person his age. He has been impressive in seven-on-seven drills at multiple camps this summer, and he will have the opportunity to do so in Happy Valley next weekend when he will be at the Lasch Bash camp and barbecue.

Penn State getting a commitment from Denmark would be huge because they beat out four teams in the Big Ten conference, although he is an in-state recruit. If he does commit he would join Cooper Cousins, a fellow in-state recruit in the class of 2024.