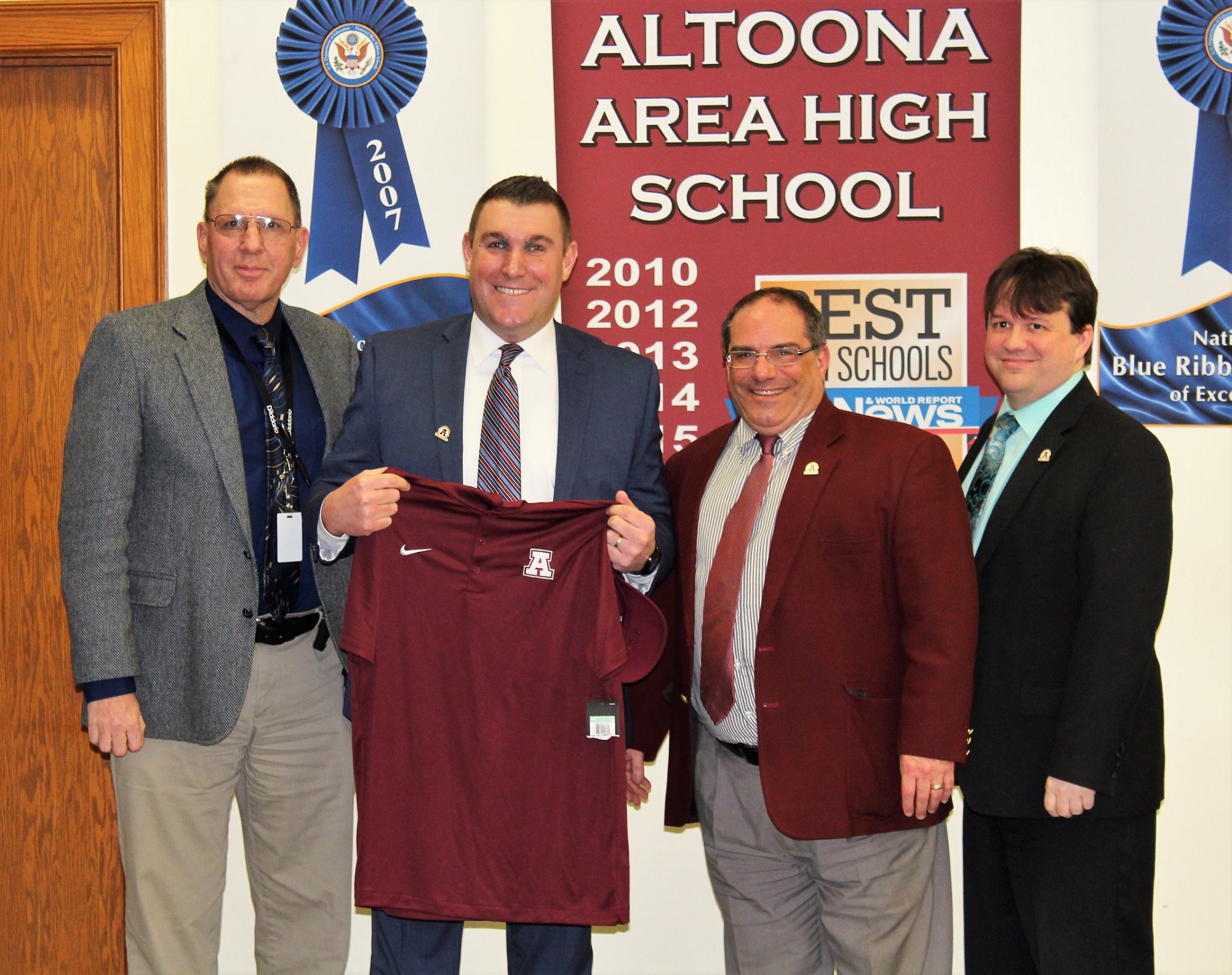 Photo from Altoona Area School District Facebook: Vince Nedimyer Jr. on the day he got the job at Altoona in 2019.

The Mountain Lions have enjoyed a great turnaround this year, and Friday they stunned State College, 22-21, to win the District 6 Class 6A championship.

State College beat Altoona last year, 48-0, but it was a much different story this time around, as the Mountain Lions tied the game with a TD and went for 2 to take the lead with 1:22 left to play.

Nedimyer was a guest on “Sports Central with Cory Giger” on Tuesday on WRTA in Altoona. This is a lightly edited Q&A with the coach.

Q: What have the last few days been like for you being able to enjoy Altoona’s first district title in 18 years?

A: It’s been nice. It was a nice weekend, and just yesterday we kind of enjoyed enjoyed the YouTube feed of it as a team. We watched the game from the first interception … to the end of the game as a team yesterday and kind of now put it to rest then so we can get ready for for the Millionaires coming up this Friday. But definitely enjoyed it when we could. And now we’re back to work here.”

Q: What was the reaction of the team as you watched the game film?

A: It was pretty cool. We rewound it a few times because there were definitely some some characters on the sideline acting up and just showing excitement for the moment. But no, it was great. It was a really relaxed atmosphere. We didn’t we didn’t really coach them up. We just kind of let them sit and watch, and I think they enjoyed it.

Q: Can you describe what’s going on in your mind when you get the game-clinching interception and you know you’re going to be district champs? You are an Altoona product, you know what this job is and has been. You had a tough year last year at 1-9. So describe that moment clinching the game.

A: It was it was pretty, pretty crazy. … I can see myself on the film just kind of walking around. I didn’t know what to do, you know. I saw Marcus (Day) and grabbed the hold of him and said, “Hey, man, let’s go run the best play in the world.” And, and that’s victory. And you know, we practice it every week, on Thursday. And it’s always a good feeling when you can call that play.

“But just crazy, from from how our kids responded, backs up against the wall against a really good State College team. And you know, we talked about just just doing your job and getting lined up. And on that play we had, you know, quite a few guys do exactly what they’re supposed to do and you know, paid off. And that’s a tribute to all those guys. Jake (Adams) obviously made a phenomenal play on the ball. It was not an easy catch. And I think we all just kind of went crazy for a moment there whenever it happened. But definitely, definitely a really a really great feeling for everybody.”

Q: Can you put into words what it means to you to have Altoona football back after some lean years?

A: To get back to where we’re at, I mean, for me, and as a coach there with Coach Riccio, for a number of years, we always were right there. “And that’s just kind of what I said Friday night. That’s where we’ve always been. And now we’re kind of there, and and the biggest thing is the buy-in from the kids. If they’re doing that, it makes our job as coaches a little bit easier. “We can just coach football, and we don’t have to worry about coaching effort and attitude. And they kind of take care of that on their own.”

Q: How did you go from 1-9 last season and losing to State College, 48-0, to getting it back so quickly and being district champs and beating them?

A: I just think we got a big group of seniors, as I said, but we also have the junior-senior class are the same kids for the most part that were playing last year. Now they’re back playing, and we had some early success … that as a as a staff that that we knew we needed to have with this group. And then we’ve been telling them since the end of last year that we have everything we need in the room in here together is what we always say to win right now.

“The kids have have worked hard in the weight room over the summer, everybody was going through kind of the same exact thing. There was just having limited access to what you really could do. We had great turnout on our Zoom meetings and different things that we put together in the offseason. And the coaches came around, and we’re here for everything, as well. So everybody was was itching for us to get good. And you know, I think now, it’s just a little bit of belief, like, we’re starting to believe a little bit.”

Q: You said it was your dream job to be the coach at Altoona. Why was that?

A: I’m born and bred. … Coming up through from Wright Elementary to all the way up through, we always looked up to the guys ahead of us. I had my coach, Ed Dalton, and I had my dad that I looked up to, and I guess it’s just in my blood a little bit.

“I had the opportunity to coach at college level at University of Rhode Island when I was there, and actually had an opportunity to go to Southern Arkansas, but I wanted to come home. I’ve always been a homebody, my parents will tell you the same thing, that I’m a little bit of a mama’s boy, too. So I like to be home. My dad and my careers have been pretty similar in that, phys ed teacher, being a coach, becoming a principal, all those kind of different things have kind of fallen into place. It’s kind of silly, we joke about it a bunch, but no, I’ve always just pictured myself here.”

Where do State College, Loretto rank among the nation’s best basketball cities?

0 These kinds of rankings are always interesting, even if they’re generally ambiguous and seemingly highly subjective. Still, they do provide some intriguing elements...