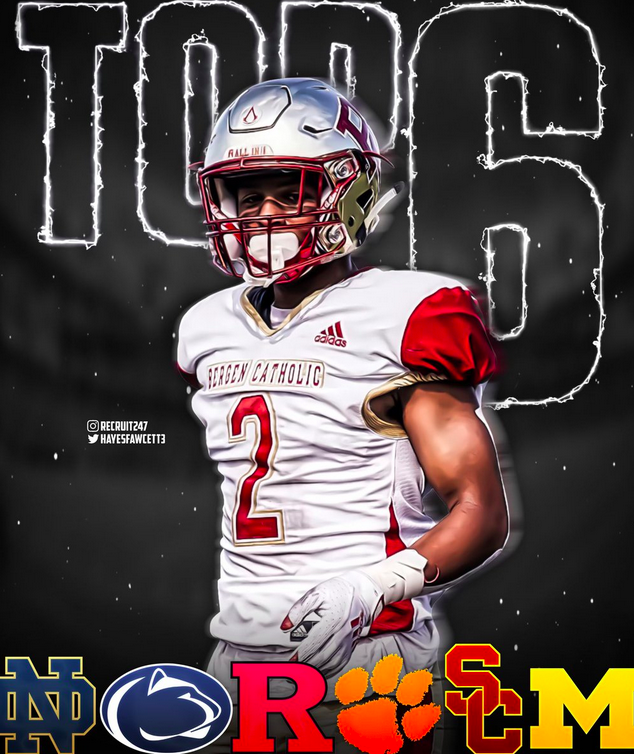 One of Penn State’s top defensive back targets in this recruiting cycle will soon make his decision. Four-star cornerback Jaeden Gould intends to announce his college commitment on Sunday at 6 p.m., and he will decide between Penn State and Southern Cal. Gould took official visits to both schools this month, most recently to State College last weekend.

From Bergen Catholic High School in Oradell, New Jersey, Gould is evaluated as the second-best player in the state, and 153rd nationally for 2022, per the 247 Sports Composite.

Gould received his offer from the Nittany Lions in July, 2019, and has visited campus multiple times since then.

He was considered a heavy Penn State lean a few days ago, but now most of the crystal ball predictions from 247Sports have him picking USC.

One of Pennsylvania’s best prospects in the Class of 2023 recently included Penn State among his top teams. On Monday, four-star linebacker Josiah Trotter tweeted that he will focus on just four schools for the remainder of his recruitment – Penn State, Ohio State, Clemson, and South Carolina.

Trotter, who measures 6-foot-2 and 225 pounds, attends St. Joseph’s Prep in Philadelphia, where he won the PIAA Class 6A Championship in the fall, alongside his older brother, Jeremiah Trotter Jr., who was part of Clemson’s most recent signing class. Trotter’s father, Jeremiah Trotter, enjoyed a very successful NFL career, primarily with the Philadelphia Eagles.

Ranked fifth in Pennsylvania and 120th overall in the class per the 247 Sports Composite, he took an unofficial visit to Penn State earlier this month.

Three more members of Penn State’s Class of 2022 recently indicated that they are shutting down their recruitment. On Wednesday, quarterbacks Drew Allar and Beau Pribula nearly simultaneously tweeted graphics showing they are 107 percent locked in to their commitments. On Monday, safety Tyrece Mills did the same.

Allar is a four-star talent from Medina, Ohio, who committed to PSU in March, while Pribula is a three-star prospect from York, Pennsylvania, who initially pledged to the Nittany Lions last August. Mills, who currently attends Lackawanna College, is a three-star player hailing from Philadelphia, and he gave his commitment in May.

With that trio no longer fielding interest from other schools, more than half of Penn State’s current class has indicated they have finalized their recruitment. Wide receiver Kaden Saunders, tight end Jerry Cross, and defensive end Ken Talley have also made the same proclamation within the past month.

Kane, who is 6-foot-1, 176 pounds, attended a camp at Penn State over the weekend, and garnered his offer on Sunday. His other offers consist of Clemson, Purdue, and Rutgers, all of which have come since the start of this month.