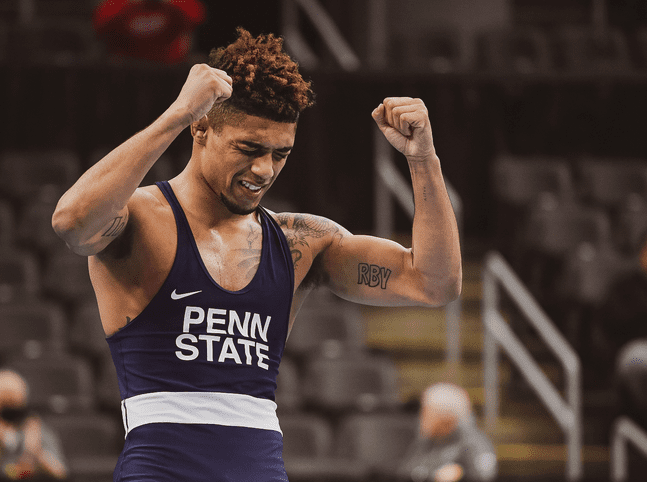 The Penn State wrestling team came in second place in the NCAA Championships last weekend, but the season ended in one of the best ways possible by going 4-for-4 in the finals, and finishing with six All-Americans.

For a lineup that was starting six freshmen out of 10 weight classes, and the Iowa Hawkeyes being as overwhelming on the mat as they were, it’s not a bad consolation prize.

Obviously Penn State isn’t the type of program that’s going to be satisfied with second place anymore. Not when you’ve won eight national championships in the last decade.

The fact that this season was essentially a free year and didn’t count for athletes’ eligibility makes one think what next season could look like for the Nittany Lions.

For some athletes in sports such as football and basketball, the best can go professional and make millions of dollars after they’re done with college. Wrestlers don’t really have that option, unless they have interest in starting a professional wrestling or mixed martial arts career.

Some wrestlers will probably decide to move on if they are in line to graduate. Some might transfer to other schools with the transfer portal being free to anyone for this year. But for the most part at a program with the caliber of Penn State, most will likely stay and compete.

Could another national championship be in store for the Lions? Given what’s returning, they should have a very strong chance.

Here is a breakdown by weight for what you can expect next season:

125: Robert Howard turned in a solid freshman season with a 7-6 record after missing the first few meets to begin the year. He would probably be the favorite to start next season, but head coach Cael Sanderson did land a key recruit in Reynolds’ Gary Steen a couple months ago. Steen placed third in the PIAA Class AA Wrestling Championships this month. Also at 125 on the current roster are sophomore Brandon Meredith, redshirt freshman Baylor Shunk, who is a Penns Valley graduate, and freshman Marco Vespa.

133: It’s pretty simple here. Roman Bravo-Young is a 2021 national champion, and 133 will be his until his time is done in State College. He will have two more seasons left of eligibility, and will once again have a good shot at another title. RBY was 14-0 on the season.

141: Read above what was written for 133, and replace Bravo-Young’s name with Nick Lee. The only difference is Lee will have just next season and he will be out of eligibility. Lee went 13-1 on the season.

149: Here is where things get complicated. Penn State had five different wrestlers either wrestle in dual meets or extra matches at 149. No one really took a stranglehold of the weight class until Beau Bartlett towards the end of the season, and he wrestled the Big Ten Tournament there. He did not qualify for the NCAA Tournament. Jarod Verkleeren wrestled the first day of the season, but was injured in an extra match against Northwestern and didn’t wrestle again the rest of the season. Terrell Barraclough, Luke Gardner, and Bo Pipher also got matches in throughout the season. Give Bartlett, a freshman with an 8-3 record, the nod as the frontrunner going into next season.

157: Brady Berge wrestled in every dual meet but one at 157 and went 10-3. Gardner got the nod in the Maryland dual, while he and Pipher also wrestled one extra match each at 157. The problem is Berge was injured in the NCAA quarterfinals and did not return to the tournament. It was a tough-luck injury at its finest. If he’s available to return next season, he’s an obvious choice to start. If not, either Gardner or Pipher could fill the slot easily.

165: Redshirt freshman Joe Lee had a promising start to the season, but underperformed in the postseason. Lee finished in eighth place at the Big Ten Tournament, and went 0-2 in his first taste of NCAAs to finish at 6-7 for the year. Konner Kraeszig wrestled in extra matches early in the season and went 3-1.

174: There’s no reason that Carter Starocci wouldn’t be the starter next sesaon. The redshirt freshman won the national championship at the weight after going 14-2 for the year. His only losses came in his first collegiate match against Indiana’s D.J. Washington, and in the Big Ten finals to Iowa’s Michael Kemerer. Starocci got that win back against Kemerer for the NCAA title.

184: The same goes for Aaron Brooks as mentioned above with Starocci. Brooks was 14-0 and the favorite for both Big Tens and NCAAs. Brooks also won a Big Ten Tournament last year as a freshman, and there has already been plenty of talk of Brooks potentially being a five-time winner of the conference.

197: Michael Beard turned in a solid redshirt freshman campaign with a 10-6 record, and was a surprise as an All-American after getting seventh place at NCAAs. He will be an obvious start at the weight next season. Levko Higgins started one match at the weight.

285: Greg Kerkvliet turned out to be a surprise this year. Sanderson thought he wouldn’t be available all season, but the Ohio State transfer was cleared for action the day before the last dual meet of the season. Kerkvliet got in just enough matches to be eligible for the NCAA Tournament, and he came in seventh place to become an All-American. Sophomore Seth Nevills was starting in Kerkvliet’s place most of the season and went 4-1 in his absence. It will be interesting to see what Nevills decides to do for his immediate future.