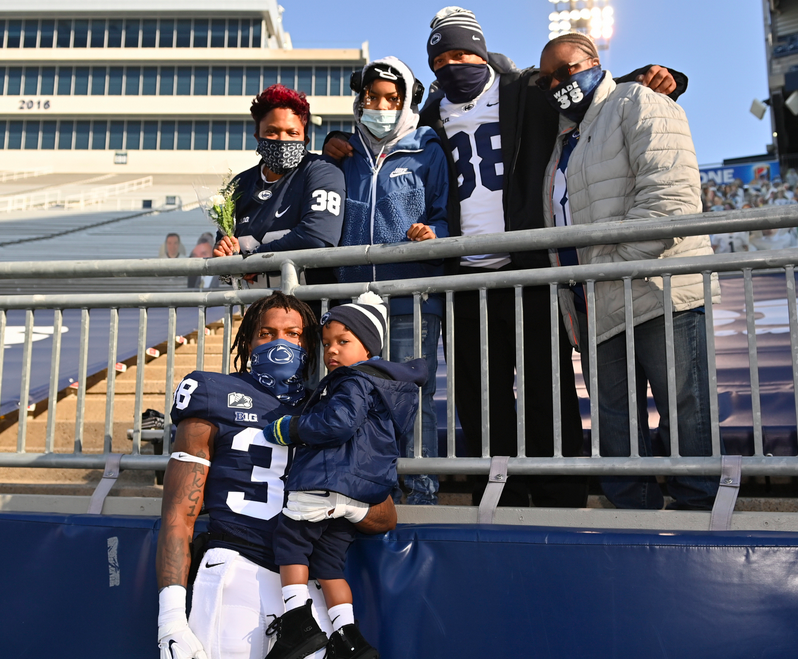 Photo by Penn State Athletics: Lamont Wade with his son, Roman, and family before the game.

Lamont Wade, who played at Penn State from 2017 to 2020, will participate with the New York Giants in their minicamp, his agent, Sammy Spina, told Pro Football Chase yesterday.

#NFL FA S Lamont Wade, who spent time with the #Steelers last season, will participate in the #Giants rookie minicamp, his agent @sammyjspina tells me.

Pro Football Chase also reported that “several other teams” are interested in Wade. Despite starting at safety and earning All-Big Ten honors  in his last two seasons at Penn State, Wade didn’t get selected in the 2021 NFL draft.

The Clairton, Pennsylvania, native spent time with the Pittsburgh Steelers in training camp and during the preseason last summer but didn’t make the regular-season roster and has yet to play in a regular-season NFL game.

If the NFL doesn’t work out for Wade in 2022, he has another option to play professional football. Last month, he announced that he’d join Germany’s Potsdam Royals for the 2022 season.

If Wade can catch on with an NFL team this summer, however, Potsdam will have to wait.

Wade came to Penn State as the highest-rated recruit of coach James Franklin’s 2017 class, per 247Sports. He had a fantastic high school career at Clairton, where he played three years under his cousin, Wayne Wade, who took over as the Bears’ head coach before the 2014 season.

Lamont Wade won three district championships with Clairton and came to Penn State as the school was coming off a Big Ten title in 2016.

Despite becoming a fixture on Penn State’s defense, it doesn’t appear that Wade remembers his time in Happy Valley fondly.

Last winter, when former Penn State running back Noah Cain transferred to LSU, Wade responded to Cain’s Instagram post with a story that said he “shoulda got the hell out of there (Penn State).”

Note: Clairton head coach Wayne Wade is Lamont Wade’s cousin, not his uncle, which was reported in an earlier version of this story.