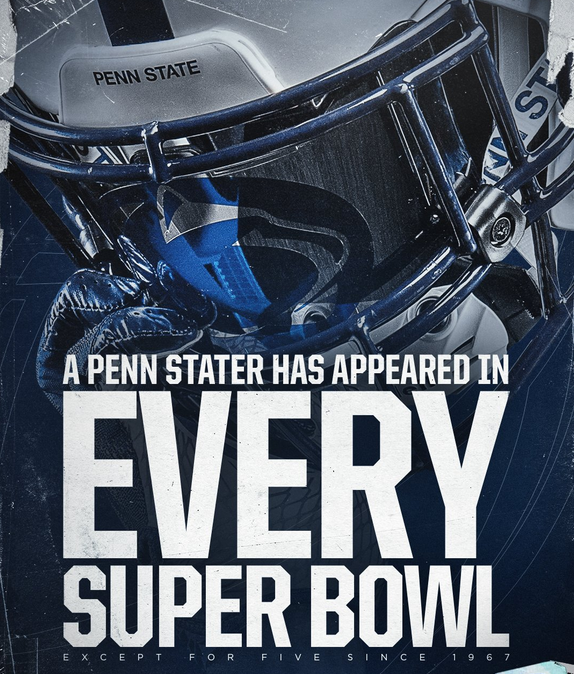 Even bad publicity can be good publicity. Whether you believe that or not, there certainly have been many examples over time that hold it to be true.

The Penn State football program received some bad — and hilarious — publicity the past few days because of a ridiculously silly graphic about the Super Bowl. But viewed another way, that silly little graphic actually brought a WHOLE LOT of attention to something that Penn State actually can be very proud of.

There is no denying that this is an impressive note for the Nittany Lion football program: Including today’s game between the Tampa Bay Buccaneers and Kansas City Chiefs, Penn State has had a player appear in 50 out of the 55 Super Bowls.

However, the following graphic that tried to bring light to that fact was, well, kind of embarrassing.

Yikes! That’s a bad graphic from a PR standpoint. It’s a good lesson for social media managers everywhere that there is definitely a fine line between trying to sell what you’re selling, but understanding you can’t just throw out something that at first glance will have people thinking of fake news.

But here’s the thing: That graphic was so bad that the nationwide reaction to it undoubtedly brought far, far more attention to Penn State’s real Super Bowl achievement than just about anything else the program could have tweeted out.

RELATED: Here’s a look at the PSU players in this year’s Super Bowl

While the rest of the country was making fun of the fine print “except for five since 1967,” a case can be made that at least people were thinking about Penn State football in some way heading into the biggest game on the planet.

Again, having a player in 50 out of the 55 Super Bowls is terrific. And even if people were poking fun at the graphic, they probably had to be thinking, on some level, that the 50 out of 55 thing was in fact pretty good.

Penn State eventually tweeted out a new graphic that was much more clear, and even poked fun at its original graphic by adding the “no magnifying glass needed for this one” line. That was pretty clever.

No magnifying glass needed for this one… 😂 pic.twitter.com/vtp6zDIjEa

Now, we couldn’t point all of this out without recognizing some of the best responses that made fun of the original Penn State graphic. So, here ya go:

That’s a lot of wins… pic.twitter.com/MBGfjogjf4