It was reported by Travis Branham of 247 Sports that Penn State men’s basketball has reached out to West Virginia transfer Jalen Bridges. 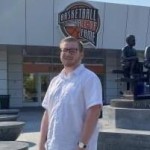